One of our neighbors is a huge follower of the Mid Century Modern movement and it’s architecture. His home is beautiful. He has followed the history of our neighborhood probably better than anyone else who lives here.  I’d even say he knows more than the first or second owners who still live among us.
He let me borrow the two brochures of the communities in our area.  We have always called our hood “Corbin Palms”.  It turns out our section was actually called Eastwood Estates. It was the second phase, not the first, that William Krisel built with Dan Palmer and the Alexander Company. The two phases are very close to one another. The Yellow Metro Line divides us.  Back in 1955 it was a railroad track that was the stopping point of one and the starting point of the other.
The layouts of both Corbin Palms and Eastwood Estates are almost identical. The biggest difference is that Eastwood Estates are larger and have air conditioning. Apparently, the only complaint people had about their homes was their size. They were too small so Krisel built the second phase bigger.  To think that today we all complain about our “larger versions” being too small with too little storage space. Living in this 1950’s home it’s clear that we’ve learned to live with more “stuff” over the decades.
So, here is the Corbin Palms brochure.  If anything it’s great to look at the graphics from back then.  Take a step back into the era of “Mad Men”. 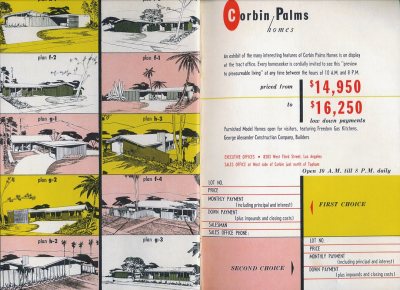